If you want a picture of what my semester has been like, here it is:

That’s right.  I’ve been so busy and stressed with school this semester that I haven’t had time to even THINK about taking it down.

Most of you would probably be surprised to know that Rwanda produces some of the world’s finest coffee.  You can get some right here at Land of a Thousand Hills Coffee.

Rwanda was deeply and profoundly affected by the genocides of 1994, in which over a million ethnic Tutsis and moderate Hutus lost their lives to extremist Hutu militias in just 100 days.

Now Rwanda is one of the world’s leading producers of coffee.  There’s a small problem, though:  Rwandan coffee growers usually receive only 40 cents per pound of coffee harvested when they need at least 60 cents per pound to cover the expenses of growing the coffee.

Land of a Thousand Hills Coffee is helping to make up the difference, offering coffee growers up to $1.86 per pound of coffee.  This provides coffee growers with a living wage where they can provide for their families and send their children to school.

Land of a Thousand Hills Coffee is also helping to promote racial reconciliation among the people of Rwanda, by providing a place where Twas, Hutus, and Tutsis who were once deeply distrustful of each other now work together toward the goal of rebuilding their lives and their country.

Drink coffee.  Do good.  Support Land of a Thousand Hills Coffee in their efforts to provide a decent living for Rwandan coffee growers and promote reconciliation among the people of Rwanda, and enjoy some of the world’s finest coffee at the same time.

UPDATE:  In light of this, I feel REALLY GOOD about promoting Land of a Thousand Hills Coffee here.  Apparently it’s because I’m white that I don’t mind paying extra to know that I’m making a difference. 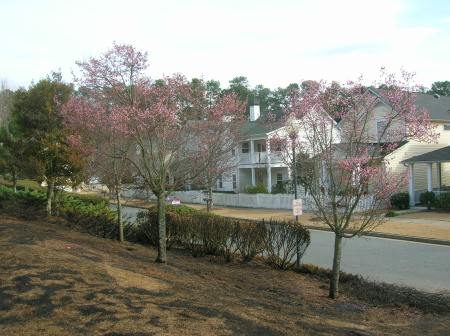 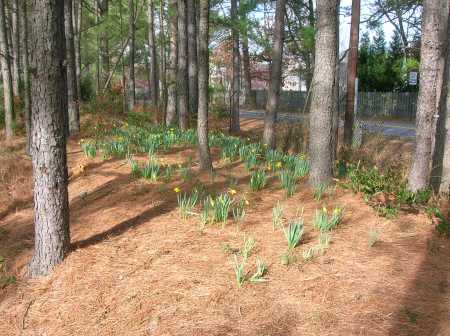 Redbud trees and daffodils are the very first things to bloom here in Atlanta, and when they start blooming that means spring is almost here!

Those of you who think that church is a dull place need to go to Reformissionary and watch this video.  It’s a pastor who preaches an entire sermon on…well, I’ll let you find that out for yourself.  Be prepared to laugh until you are blue in the face.

This pastor obviously has WAY too much time on his hands.

Recently my church completed a sermon series entitled “Just Ask”, in which they unpacked their vision of relational evangelism.

Now, if you’ve been tracking with me for any length of time you know that I have my own personal issues with the concept of witnessing or relational evangelism (or whatever else you would choose to call it or whatever skin you would put on it), which are well-documented here on this blog.  But that is not what I wanted to talk about today.

What I wanted to talk about was a point that came up in the course of one of the messages.  The message in question was about the power of the Christian message that we are called to share with the rest of the world.  And the point that I wish to take issue with is about the Biblical law and its role in our message.

Now, all of this is true.  I fully believe that Biblical principles are good ideas to live by, and that if we live by them our lives will be better and our society is better.  That is completely true.

But it’s not the point.

The point of the message that we are entrusted with the task of sharing with the world is this:  We are not good people who can do better.  We are not bad people who need to do better.  We are dead people, spiritually dead people, who need to be brought to life.  No amount of law keeping can get us around this fundamental problem.  The only possible remedy for this problem is Jesus Christ, who came into the world as one of us and died the death that we all deserved to die.

Several years ago I had a crush on a girl that I had originally known back when I was in college (the first time around), who had since moved back to Atlanta and become actively involved at my church.

Now, crushes are no fun.  And this one was no fun, especially at the end.  It all ended when she told me, through a close and well-trusted mutual acquaintance, that my presence was making her uncomfortable and I needed to give her space.  She has moved on since then, and is now happily married to someone else.

But while this crush was in progress, there was a huge upside.  This was the possibility (in my mind, at least–however remote it may have been in real life) that she might, at any time, on any day, throw herself into my arms and say, “I’m yours, Joe, take me away!” or something to that effect. END_OF_DOCUMENT_TOKEN_TO_BE_REPLACED

Today I would like to offer you a series of posts from Real Live Preacher.  In these posts, RLP starts with the premise that enlightenment and disillusionment are both necessary components of spiritual growth, then goes on to recount an experience from his college days which was quite disillusioning for him.

Now it may be true that a lot of people who become Christians, especially during their adult lives, have such a moment that they can point to, but think what it means if this is the only way, or even the principal way, that people become Christians.  If becoming a Christian is something which happens at a single moment in time, that’s something which can be counted.  And we love numbers, so we will count it.  And if the numbers look good, then we will pat ourselves on the back and say what a good job we are doing, or praise God for the mighty work that He is doing.

Another consideration:  We as evangelicals believe that everyone spends eternity in one of two places.  The vast majority of people are going to spend eternity in the less desirable of these locations.  If you want to escape hell (the less desirable place) and spend eternity in heaven, all you have to do is say a prayer to confess your belief in Jesus Christ.  This means that if you truly love Jesus, then it is your duty to tell as many people as possible about Jesus so that they can believe and go to heaven as well.  Kind of a daunting task, especially when you consider that you will pass by lots and lots of hellbound people as you move through life.

All of these considerations come together in the disillusionment which RLP recounts in these posts.  Read them, and prepare to wonder if all that you’ve believed about eternity, about becoming a Christian, and about our supposed mandate to tell everyone we come into contact with about Jesus are really worth believing.