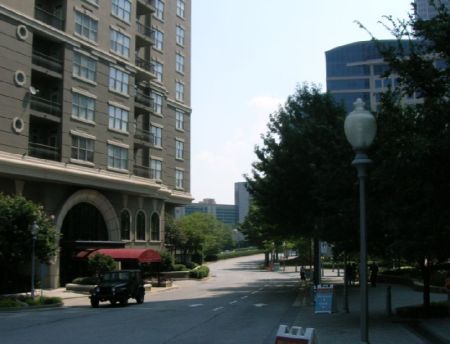 This is the street outside my church.  This is right in the heart of Buckhead, in a land of trendy shops, swank hotels, and high-rise condos that touch the sky and command an overwhelming view of the city.  The landscaping here is beautiful, with colorful flowers, green grass and trees that all add up to a sumptuous feast for the eye.

It’s like the Garden of Eden here, or at least somewhat close to what I would imagine that it must have looked like.

And man did this.  Not God.

If we can create all of this, do we really need God?

Sure, it is God who makes the grass, the trees, and the flowers grow.  Sure, it is God who empowers the minds of the architects, engineers, and designers who created all of this.  But God’s role in creating this scene is strictly a supporting role.

I walk down this street on my way to church every Sunday, and these are the things that I think about as I look at this scene.  And I can’t help seeing the parallel with our nation.

We have created an amazing edifice called America.  Anyone from other parts of the world who sees what we have here freaks out over the possibility that such a place exists.  We have amazingly beautiful houses, buildings, cities, and neighborhoods.  Everything we could possibly need from a material standpoint is all right there for us, and it is there in abundant supply.

And we do it all without God.

I once heard of an international student who came to America and said, in response to all of the splendor of American culture and church life, something to the effect of “It’s amazing what these people can do without God.”  I would not be surprised if that were true.  If I were seeing America through the eyes of an international student, I would probably say the same thing.

Does anyone else out there feel the conspicuous absence of God in all of the s–t that we do as part of American evangelical church life?  That we are doing all of this stuff for God, that we are creating fabulous experiences for people that provide a huge emotional rush, that we are imparting tons of knowledge to people about the things of God, but underneath it all God is not really present?

And then you hear about things that are happening in other parts of the world, where the kingdom of God is advancing by leaps and bounds.  You hear about the growth of the Church in other places and about things that are happening in the lives of people over there that can only happen by the power of God.  And perhaps you wonder, why isn’t any of that happening here?

Well, that could be the reason.  God goes where He is needed.  God does not show up where He is not needed.  People in other parts of the world generally do not have it as good as we do; thus they are under no illusion about their ability to live without God.  For some people, even getting enough food to live to the next day requires a miracle from God.

But here, we have it good.  All our needs are provided for, for the most part.  Our grocery stores are stocked full of the best fruits, vegetables, and other foods, for as far as the eye can see.  We have clothing stores that cater to every possible taste in fashion–and have the requisite clothes in abundant supply.  If we don’t want to cook, we have restaurants covering every possible range of culinary taste that will serve dinner for us.  And all of this is easily accessible to us.

Living in such a world, it is so easy for us to think that we don’t need God.

September 11 shattered a lot of our illusions that we can create and sustain a world for ourselves in which God has only a marginal role if any–at least for a season.  But now it seems as if we have returned to the belief that we can do it all without God.

This year, on the anniversary of September 11, I wonder:  will it take another event of this magnitude to disabuse us once and for all of the notion that we can live without God?

2 thoughts on “Do We Really Need God?”